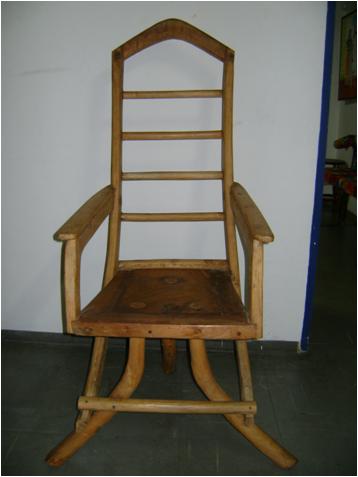 Known as “Seu Fernando”, he was born in 1928. He was the first artisan in Ilha do Ferro, Alagoas. He reports having started in the sixties, making clogs, cots for his children and beds for the family. However, it was a dream that helped him create fantastic furniture. Using the movement of branches, he sculpted chairs that seem to spring up from Spanish artist Salvador Dali’s hands; some with three legs, others with five, none obeying furniture conventions. Each chair is a new creation, never has he made two of them alike. After a neurologic disease, Seu Fernando started to orient his son-in-law Valmir in the creations. Nonetheless, until the very end, he still made it a point to sign all of the furniture items that were shaped. At the age of 79, he often included in his works short verses and savory chronicles on facts that occurred in Ilha do Ferro. He died recently on January 10, 2009.